With Thanksgiving just around the corner, it's time to think about the menu. How about a couture pumpkin pie? As with fashion, just a simple tweak can turn a ready-to-wear style into a couture one. And so it is true with pumpkin pie.


I am visiting my parents in Canada, and this morning, my mom asked me to make a pie for lunch. She pulled out a clipping she had from Canadian Living magazine. The technique is simple, and the results are creative and fun. 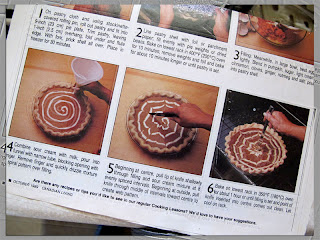 So.. here is the technique.
After you have made the pie mixture and put it in the shell, smooth it out. 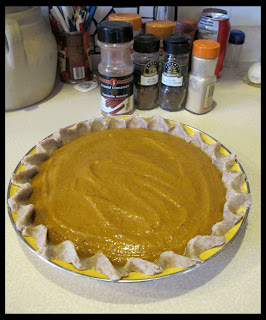 Take 2 tablespoons of sour cream, and mix it with 1-1/2 tsp of milk. Then take a funnel and put your finger over the tip. Spoon in the sour cream mixture. 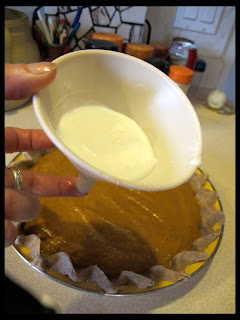 Move to the pie, and center the funnel over the pie. Remove your finger from the tip of the funnel and let it drip out as you move around the pie. Start in the center and swirl your way to the outside. 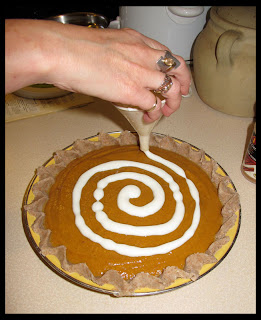 Then, take a knife, position it in the pie mixture and move from outside to center. Do this eight times to divide the pie. On one of my pies I simply stopped in the center; on the other I swirled around a little in center. 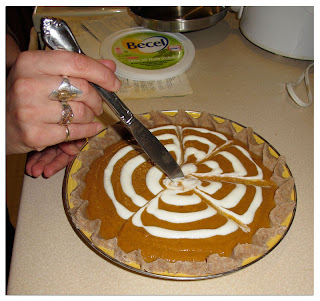 Bake the pie as usual, and then cool it. 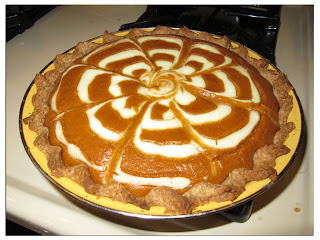 Cut and serve. Here is my dad, enjoying a piece of Couture Pumpkin Pie! 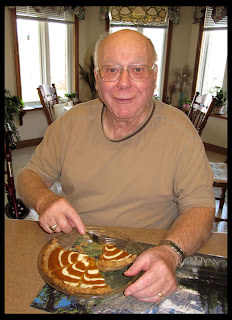 Does Slabtown deliver to Blyth?! ;-)
Enjoy your time with your folks.

Wish I could! Hope all is well with you Ernie.